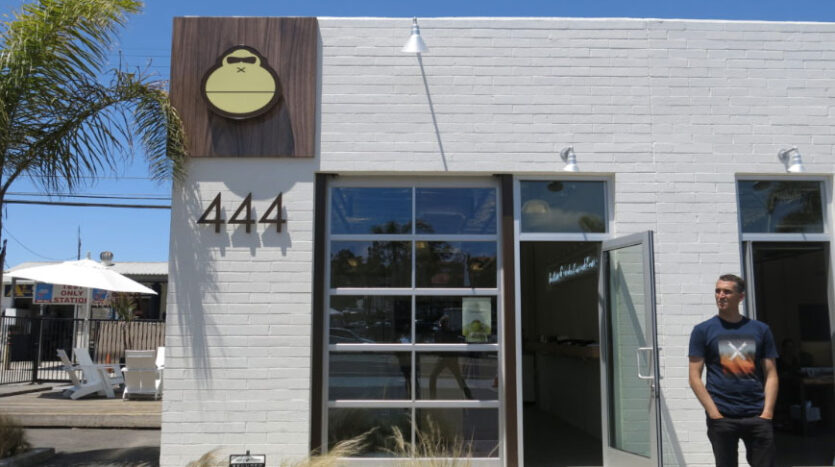 Set alongside the historic Highway 101 in Encinitas, Sun Bum‘s new West Coast office space maximizes its 3,000+ square feet by utilizing the openness of two large communal work spaces, emphasizing team building rather than relying on the traditional cubicle model that has dominated office spaces for so long. One common room houses the majority of Sun Bum’s twenty-one employees, and a second space hosts senior staff.

The company moved into this location in November 2015, but has rapidly outgrown its new digs, admits CEO Adam Francis. Although the company realized upon signing the lease that it would quickly outpace capacity, that didn’t outweigh the importance of having a beach-side West Coast presence. The company aimed to be as close to the epicenter of sun and an active lifestyle as possible. For those who live, work, and have ever visited Encinitas, California, they know that it’s about as close as it gets to epitomizing that culture. The team, therefore, couldn’t pass up the one-of-a-kind location. Instead, it’s working on a strategy to accommodate it’s growth as it happens.

Part of leasing space in such a popular destination is that every business on Highway 101 is mandated to have an aspect of community involvement. “It’s part of the planning requirements,” says Francis. “If you’re on the 101 in Encinitas, it’s got to be a combination of office and retail space.” Sun Bum, however, had no interest in getting into retail. Instead, the brand found the perfect way to strike a balance.

“We didn’t want to compete with the local retailers,” explains President Tom Rinks. “We aren’t here to do that, so we made a concept store. It’s a way for us to communicate with our consumer in a personal way, that doesn’t take away from our retail supporters in the area.” The concept store, co-located alongside its offices, will host get-togethers, installations, art galleries, and feature special collaborations and one-offs from fellow brands.

Besides its proximity to the beach, it was this potential for community engagement that was the biggest attraction for the brand’s relocation. The brand has plans for yoga classes, workshops, galleries, live music, and a wide array of other activities in the works—activations that allow the sunscreen company to connect with its fans on a personal level. Rinks sees endless possibilities, and already has plenty of ideas brewing. “We’ll have freeride bikes that folks can take and bring back when they want, and maybe Smoothie Mondays,” he muses. The space will also feature brand collaborations and limited product—like the one-off 14 carat gold sunglasses on a chain, priced at a cool $7,900. Nearby, a bowling ball, a gum ball machine, and other random items liven things up. “If you’re here and you’re visiting, and you wanna come by and see something that’s cool, and you wanna buy it, sweet,” Rinks says.
Sun Bum’s concept store is part of their newly-acquired Encinitas office space
The concept store is as fun-loving and free spirited as the brand itself. Sunny vibes, clean lines, and natural elements make the space inviting. The southern wall is dedicated completely to Sun Bum’s product offerings; it’s a visual explanation of what consumers can find at their local surf shop, or boutique. As Francis puts it, “This concept store is all about brand experience. It’s limited edition goods, it’s not anything that we’ll offer at our retailers. All this stuff here is really for fun, to show the depth of the brand.”

As a mirror of that sentiment, one of the first elements to catch your eyes as you walk through the office space is a mural hanging in the large common room, done by brand ambassador Zack Noyle. On the opposite wall, surfboards from each of Sun Bum’s athletes —Julian Wilson, Filipe Toledo, Malia Manuel— are front and center. Sun Bum places huge emphasis on supporting its athletes, employees, and—most significantly—its retail partners. Programs like its annual retailer awards and call-outs on social media are helping many of its core accounts drive traffic and elevate themselves as “brands” in their own respect.

TransWorld Business sat down with Sun Bum’s Francis and Rinks to discuss the brand’s descent upon Encinitas, goals for 2016, and what they are doing to go above and beyond to support retailers.

Sun Bum has a history of partnering with core, specialty shops, giving your brand a unique perspective into retail. What is your take on the current state of the retail landscape? Can you offer any insights on how you see retail right now?

Adam: Not being a retailer, it’s hard to speak to, but, it’s difficult. We’ve got a lot of friends that are in surf retail at the moment, and they’re struggling. But there are cycles in retail, and we’ve been in this position before. We’re focusing on offering something that’s affordable, relevant, and cool to them, and it’s an accessory to other products or brands in their store.

Tom: It’s about giving them something that’s new. We’ve ventured into hair care, and everybody questioned that at first. But it’s something new. Initially, consumers weren’t coming to the [core surf] store to buy sunscreen, because they were getting their sunscreen from mass [retail]. To be able to come in and get a specialty product is still what specialty is all about. So that’s our influence on that, and it’s why we focus on surf shops still.

What can surf shops do to stay relevant and compete in the current landscape? As you said, offer specialty products, but does Sun Bum see anything else that shops can do to stand out?

You can get your whole lifestyle there.

A: It’s all there now: Apparel, shoes, surfboards, accessories, sun care, our newly released hair care, cameras. All the items someone with a surfing lifestyle would look for, but keeping them niche, specialty.

T: And also what’s important: it’s the experience, and the education. You don’t have that anywhere else. You don’t have anybody that understands the products the same as specialty stores do. At a pharmacy or a grocery store, they don’t understand the differences between sunscreens, or leashes. That’s why I go to specialty if I want somebody that actually knows what they’re talking about.

It’s officially the start of summer. What’s new for Sun Bum from a product perspective, moving into this season?

A: We’re really focusing on how to care for every consumer, in any age range. We’re currently building out the Baby Bum product offering, which is our natural sun care offering for babies and those with sensitive skin. Our other new release is focused on tanning, which is sort of unexpected for a sunscreen brand. What we’ve found is although we’ve got something to protect everyone from the sun, and they’re using our products, people still want to get color. So instead of being ignorant to that, we looked at how we can actually fit into the message we put out there. As an answer to those that want that summer glow, we’ve developed an accelerator, which is a browning lotion, so less time in the sun to get your color. Protect yourself with an SPF of choice, we say 15 or above, and then use the accelerator for faster color.

T: Although we’ve spent our careers smothering our kids and friends in sunscreen, they still want to get tan. There’s lots of people out there that want to get tan—the people in this room still want to get tan. So we’ve got to get them in and out of the sun quicker, if not in the sun at all. To combat this, we developed tanning towelettes. You use them at night, and then in the sun, you can protect yourself with a 15 or higher.

Consumers today want color in a cool way, and they want to be safe. As a sunscreen brand, you just have to accept that people still want to be tan, and find ways to protect everybody.

T: This is all new for surf. This is the cosmetic world. They’ve never had tanning products, and these are innovative new products, that we’re bringing to the specialty retailer. And again, although they’ve never had it before, they’re “trusting the bum.” They didn’t want to bring our sunscreen in originally, because it was too expensive, or they didn’t sell sunscreen. A lot of surf shops, believe it or not, used to not even sell sunscreen, because it was only bought in grocery and pharmacy, and surf shops only had access to the brands that everybody carries, and so they just couldn’t compete. When we came in, the surf shops took a chance and took us in, and they trust in our product offering. Still, the tanning world is a really new world for them.

Sun Bum is known for setting the industry standard when it comes to supporting retail partners; the brand has the Surf Shop of the Week program, and the annual Shop Awards. How did Sun Bum come up with this model to drive awareness for surf shops, and why is it so important for your brand to promote retail?

T: Core retail shops are where we started. We started in Florida surf shops, and we created our product for specialty. The little shops that took the risk and took our little brand in, we support them. We’ve started a Founder’s Club, because as we’ve gotten bigger, we don’t just want to protect the “cool” people, we want to protect our origins. We’ve had a lot of opportunities with different stores and chains, and as we decided to take those opportunities, we knew that it was on the backs of the retailers that took a chance with us, the small mom and pops. The Founder’s Club is for the one hundred-or-so initial stores that opened us up in the beginning. It’s a way to give back, and say thank you to them.

A: We try to give them that level of support that they gave us from the start.

It sounds like you’re all about acknowledging your roots.

A: Absolutely. And more importantly, the brands’ roots around the beach lifestyle and surfing. We haven’t forgotten that, and we’ll certainly never forget the support that they have given us as we continue to grow.